Art celebrates past, looks to future 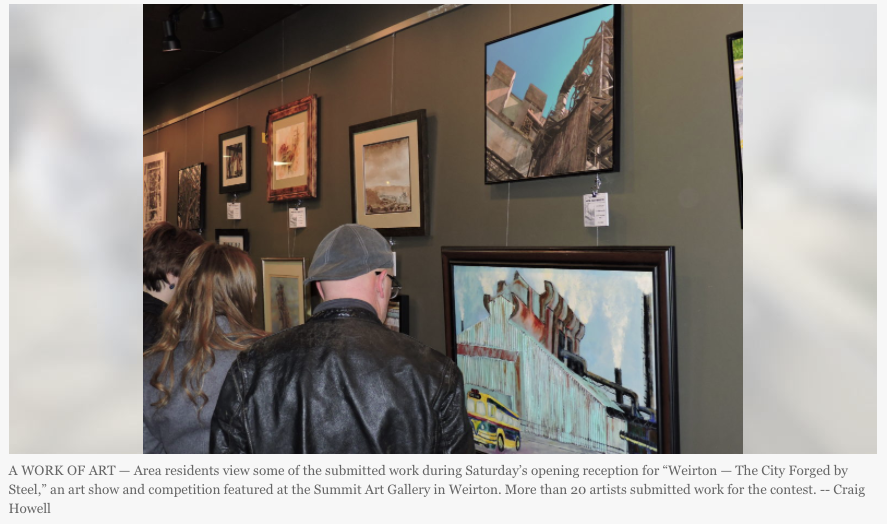 WEIRTON — It was a celebration of art and the history of the community at the Summit Art Gallery Saturday, with the opening reception and awards ceremony for the “Weirton — The City Forged by Steel” art competition.

More than 20 artists answered the call, entering pieces in a variety of media to pay tribute to the former Weirton Steel Corp. and its impact on the community. Much of the work focused on the basic oxygen plant which, for years, has been a focal point of the Weirton skyline.

Event Chair Alecia Ford expressed her appreciation to all who participated, and thanked those who offered their support for the competition, in particular David Franjoine, chief executive officer of the Frontier Group of Companies, which contributed $1,000 toward the prize money for the show.

“He literally came on board from minute one,” Ford said. “He was such a blessing.”

The Frontier Group purchased much of the former steel making properties in Weirton, and is in the process of demolishing the structures.

Weirton City Manager Travis Blosser thanked Ford for her work in putting the show together, noting it helps to preserve the past and celebrate the future.

“Art is very important to this community,” Blosser said.

According to Ford, the artwork will be on display at the Summit Art Gallery until March 23, and prints of the work will be available for purchase, as will a book collecting all of the entries.

Best in show was awarded to Stephen Opet, of Fayetteville, N.C., for his work “BOP Shop Welders,” which had been entered in the mixed media category.

First- and second-place awards were presented in several categories, including: