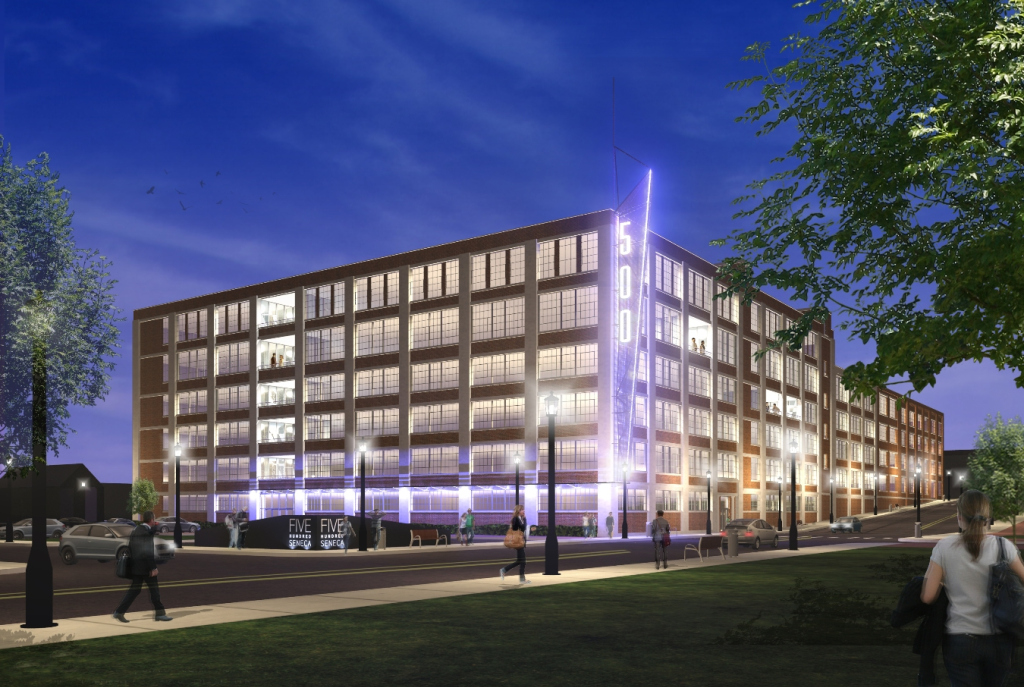 The redevelopment of 500 Seneca Street now includes residential space. Fifty-five apartments are planned for what is being called Box Factory Lofts. The balance of the 500 seneca street complex will be Class A office space and below market space for community and/or cultural organizations. Savarino Companies and FFZ Holdings are teaming to redevelop what was originally the F.N. Burt Company box manufacturing plant and later used by New Era Cap Co. The property is listed on the National Register of Historic places and the project is utilizing historic preservation tax credits.

The 55 apartment units will be located on floor two through five in the eastern, or oldest portion of the complex along Hamburg Street (entry image). The residential units will be going into the wood frame structure that was otherwise going to be used for tenant storage and low-end tenant use. When reuse of 500 Seneca Street was first proposed, this portion of the complex was going to be raised. It was saved after the development team decided to utilize historic preservation tax credits and after consulting with the Buffalo Preservation Board among others. With the addition of residential units, there is no change to the amount of commercial office space available.

There will be a residential lobby at the corner of Seneca and Hamburg streets with residential-only elevators. Tenant will be able to enter the building from a secure parking lot on the north side of the building and from an indoor parking area. Direct access will be available to the office portion of the complex for an easy commute. There is a freight elevator for tenant use as well.

“This project will serve to activate the oldest and most historically significant portion of the 500 Seneca complex,” says Samuel J. Savarino, President and Chief Executive Officer of Savarino Companies. “It is a great example of adaptive reuse and will activate an under-utilized portion of the project.”

The one and two-bedroom apartments will range from 745 to 1,330 sq.ft. of living space. These will be lofts that will utilize the historic features of the space. Residents will have access to a private, open air courtyard, a 24-hour fitness center, a tenant “clubhouse” and event room, a second floor outdoor patio deck area, and storage areas for bikes, skis, kayaks, etc.

Rents will range from $650 to $1,400 and the units include washers/dryers. Apartments will be available this winter and pre-leasing starts soon.

“The prospects have brightened for the neighborhood,” says Savarino. “The abandonment of the City Mission project [at 545 Swan Street] was a factor; the primary factor however was the brighter prospect for street improvements on Seneca Street between Larkinville and downtown. The property owners along that path (Howard Zemsky, Jake Schneider, Jim Sandoro, and Savarino/FFZ Holdings) funded initial designs which included pedestrian-friendly features and ‘greening’ with the intent of getting it in the queue for City-funded improvements.”

Property owners are working with the City on creative ways to fund the streetscape project.

On the commercial end of the complex, two tenants have agreed to anchor the 300,000 sq.ft. development. Frontier Industrial Services and Frontier Group of Companies will relocate their headquarters from much smaller offices at 26 Mississippi Street to 60,450 sq.ft. of space. The building will also house the BCOME Buffalo job training program in 22,000 sq.ft.

The primary entrance to the office portion of complex will be located on the western end of the building closest to downtown and will feature a three-story lobby. A second courtyard on the western end of the block will be enclosed and run from the third to the sixth floor. A cafeteria is planned for the third floor with seating available in the atrium.

Offices will feature loft-style finishes with large exterior windows. Balconies are planned for the western façade facing downtown and can be added elsewhere if tenants desire them. Architectural firm chaintreuil jensen stark is designing the project. preservation studios is handling the tax credit certification work.

Work on 500 Seneca is underway with the new exterior windows now being installed. Commercial tenants are scheduled to being occupying their space in December.

Box Factory Lofts is the second residential project announced this year in the Larkin District. Across the street, Frontier Group of Companies is working with Creative Structures Services to develop The Square at Larkinville that will feature 31 apartments and commercial space at 550 Seneca Street.

“The corner of Seneca and Hamburg will now be a very active one,” adds Savarino.

See original article at the link below: