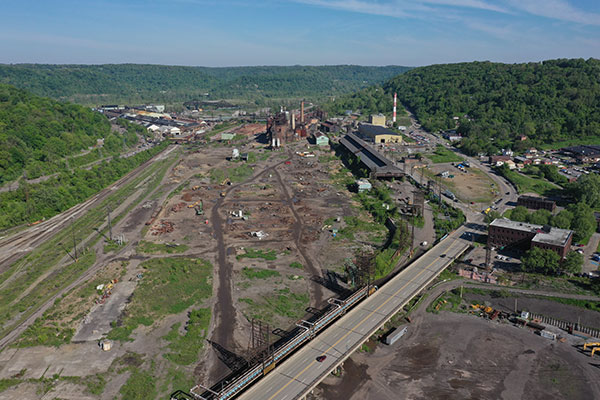 With the repurposing of more than 1300 acres in the works, calling the planned Weirton Frontier Crossing “a big deal” might be an understatement.  That was the topic of a recent meeting hosted by the City of Weirton and attended by City officials, executives from the Frontier Group of Companies, and US Representative David McKinley-WV District 1.

The Frontier Group of Companies has a plan to repurpose 1,300 acres of surplus property of the former Weirton Steel / Arcelor-Mittal steel production plant that, at one time, formed the heart of the regional economy for more than 100 years.

David Franjoine, CEO, Rob Zuchlewski, COO, and Patrick Ford, Director of Development for the Frontier Group presented the company’s plan for transforming this brownfield into more than one million square feet of manufacturing and commercial redevelopment in the planned community of Weirton Frontier Crossings. The Frontier Group plan forecasts Weirton Frontier Crossings will attract over $2 billion of private investment and create more than 3,000 jobs.

“The Weirton Frontier Crossing plan is a real economic catalyst for the region.” commented Franjoine. “Forums like this provide an opportunity for the private and public sectors to collaborate and create ways to move a valuable project forward.”