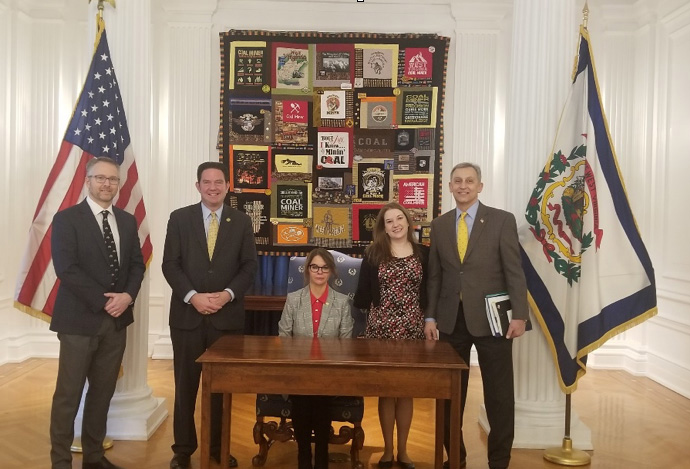 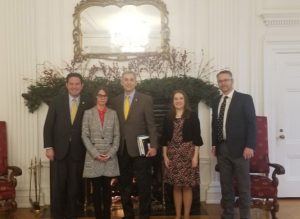 CHARLESTON, WV – City of Weirton Officials, along with the Frontier Group of Companies Chief Operating Officer Robert Zuchlewski, met with top state leaders to discuss the Frontier Crossing Development and request their support.

In 2017, the Frontier Group of Companies completed an acquisition of 1,300 acres of closed and obsolete Weirton Steel/ArcelorMittal factory properties to launch new manufacturing, industrial, and commercial development. Frontier has now invested nearly $80 million in this former steel property and continues to work with the City of Weirton to create a master plan for the 3.25 million square feet of development that could bring $2 billion in new investment and create over 3,000 new jobs. The new development will support industry, manufacturing in the downstream shale gas sector, warehousing, the largest solar project in the state of West Virginia, and commerce related to railroad, barge, and trucking.

To advocate for the economic development, the Weirton team met with the Chief of Staff to the Governor and other officials in that office; WV DOT Secretary Byrd White and Chief State Highway Engineer Jimmy Wriston; and with WV Commerce Secretary Ed Gaunch, WV Development Office Director Michael Graney and their team. Weirton was very pleased that these state officials met their requests with strong expressions of support. Weirton Officials plan to revisit the state capital to brief senior officials on specific follow-up actions to implement this plan and partnership.

Weirton now has the opportunity to undertake what could be one of the largest economic development and jobs-creation projects that West Virginia has seen in a generation”, says City Manager Joe DiBartolomeo. Weirton and the Frontier Group of Companies are pleased with the response and enthusiasm the State Officials expressed during the meetings, and from those meetings it was taken that the State Officials understood the great opportunities of the Frontier Crossing Development and want to move the development forward. Mayor Harold E. Miller stated, “Weirton is excited about the partnership and in making Frontier Crossing a reality.”