Conversion to start on 550 Seneca building 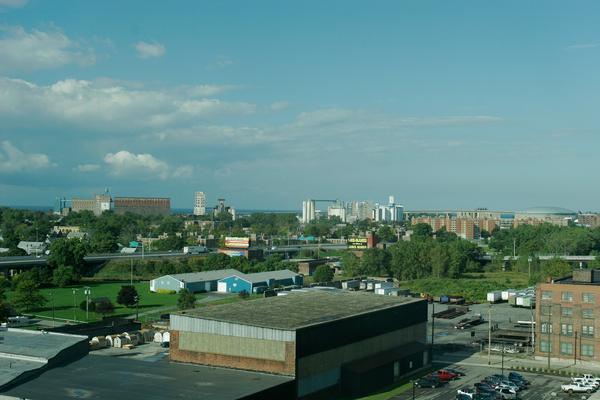 What was once a vacant and abandoned warehouse will soon be transformed into a beehive of construction activity at a site between downtown Buffalo and the fast-growing Larkin District.

Next month crews will begin the $6 million-plus renovation of a former A&P Warehouse at 550 Seneca St. into a residential-based project anchored by 41 market-rate apartments. The privately-financed project, being developed by the Frontier Group of Cos., stands as one of the largest residential-based projects along the Seneca Street spine that connects downtown with the Larkin District.

The work is being overseen the projects’ general contractor, Creative Structures Service Inc., and the Carmina Wood & Morris architects.

Although it has been vacant for more than a decade, David Pawlik, Creative Structures Services owner, said it is in solid shape.

Plans call for the building to have a mix of one-and two-bedroom units, ranging in size from 850-square-feet to 1,400-square-feet. It also includes indoor parking for 78 vehicles.

Rental rates are still being determined.

Pawlik said he expects the building will be tenant-ready within the next year.

The project is a companion to another across Seneca Street that Frontier is undertaking. That building, at 500 Seneca St., is being renovated into a mixed-use facility with both Class A office space and as a community center. Frontier is also working, in conjunction, with the Savarino Cos. of turning the former Lake Erie Freight House along Ohio Street into a 78-unit apartment complex overlooking the Buffalo River.

Still, the 550 Seneca St. project is considered a development landmark because of its residential base.

“We did a lot of market studies and clearly there is a big demand for apartments in or near Larkinville,” Pawlik said.

The A&P warehouse, which dates back to the early 1900s, has been used for a number of industrial purposes including serving as a storage center for auto parts and also a furniture warehouse.