Developers convert another Larkinville warehouse into a mixed-used facility 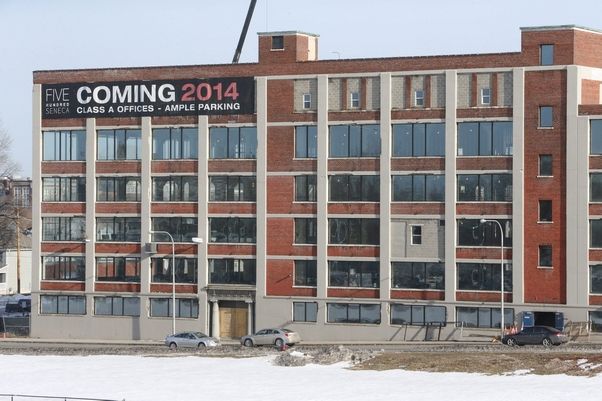 A major national insurance company and a big commercial collections firm are lining up to move into most of the commercial space at the former F.N. Burt Co. manufacturing facility, as plans take shape for redeveloping another hulking Larkinville warehouse into an active facility for both commercial offices and apartment dwellers.

The development team, which includes Savarino Cos. and Frontier Group of Companies, is spending $38 million to convert the 306,000-square-foot historic structure at 500 Seneca St. into a mixed-use complex.

Plans call for the building to include a blend of 150,000 square feet of Class A office space and 110 residential units, each comprising about 40 percent of the facility. The rest of the building will be made up of shared or public space, including a new European-style bistro restaurant off Seneca Street, with a large wine cellar that the developers will operate themselves.

The five-story building, which also has an 18,000-square-foot sixth-floor penthouse available for commercial use, will feature a three-story atrium with a skylight, gardens and full-grown trees, as well as a private courtyard accessible from the building and Myrtle Street, an indoor “grab-’n-go” cafeteria, a spa and salon, and a bi-level fitness center. Developer Samuel Savarino said it also will include a bicycle storage and repair facility, climate-controlled tenant storage, meeting space and a pet day care.

As interior construction work continues, the developers have already signed new leases with businesses ranging from a leading insurer and two insurance agencies to a collections firm, a couple of technology companies and a distillery. Plans call for the new commercial tenants to start moving in as soon as May, putting at least 300 jobs on the long-vacant industrial site.

Among the newest tenants is property and casualty insurer Liberty Mutual Corp. of Boston, which will occupy 13,000 square feet of space on the sprawling building’s third floor for what is tentatively being called its Buffalo Law Center, said Savarino, president and CEO of Savarino Cos.

The insurance carrier, one of the nation’s largest providers of home and auto insurance, will create 65 to 80 new jobs, mostly for attorneys who will handle a lot of the company’s legal work nationally, Savarino said.

Negotiations were ongoing for several months on the deal, but the lease is now signed, and Savarino submitted permit applications to the city Wednesday morning.

The developers previously received Common Council approval for a long-term lease of city-owned property across the street that will be used for parking.

Specifically, Savarino said, that property – an aggregation of several small parcels between Hamburg and Alabama streets – will be used primarily for Liberty Mutual employees. The lease includes an option for the developers to buy the land later.

Additionally, collections agency ABC-Amega Inc. plans to move its headquarters Aug. 1 from its current home at 1100 Main St. to 22,000 square feet on the 4th floor of the Burt building, making it the largest tenant overall in the building. ABC-Amega will occupy that floor’s entire C-shaped commercial area, “with expansive views in all directions across Buffalo,” according to a memo from ABC-Amega CEO David I. Herer to his employees on Friday.

“It will be considerably larger and more efficiently laid out than our current location, in order to accommodate our expected growth,” Herer wrote. “It will be modern and historic, open and comfortable, filled with areas to retreat and relax as well as work and grow. You will be part of one of the most talked about developments in the region.”

The privately held company, which currently employs about 125, was founded in 1929 as the American Bureau of Collections, and has about 3,500 clients today.

It was previously located on the fourth floors of the Brisbane and then the Rand buildings from its founding until it moved to its current site in 1985.

Both Savarino Cos. and Frontier Group also will relocate their headquarters, taking up 5,000 square feet and 9,000 square feet, respectively. Other pending tenants include:

• Bradford Energy, which will move from Delaware Avenue to 3,500 square feet on the 5th floor;

• Bene-Care Agency, a Webster, N.Y.-based employee benefits firm that will expand and move its local office from Lancaster to 4,000 square feet on the third floor;

• Leadership Buffalo, which will take up 2,500 square feet on the fifth floor;

• An as-yet unidentified technology firm that specializes in helping businesses use data, which will take up 7,000 square feet on the fifth floor, starting June 1;

• An unidentified local insurance agency; and

• Tommyrotters Distillery, which will make gin and vodka, and operate a tasting room and mezzanine viewing area in 5,000 square feet on the first floor.

The building’s first floor will also include the Hydraulics Data Center, which will be available for use by either tenants of the building or “people who want to co-locate on the premises,” Savarino said.

The data center operation will allow companies to transfer their technology infrastructure out of their own space into a secure, central location, providing an attractive incentive for users with large data storage or computing needs.

Meanwhile, residential tenants will begin moving into their studio, one- and two-bedroom apartments, dubbed the Hydraulic Lofts, by September. Units range in size from 560 to 1,400 square feet, and will rent for $500 to $1,700 per month, with 20 different floor plans. Savarino said the developers will not start pre-leasing residential units for at least another month.

The project, designed by Chaintreuil/Jensen/Stark Architects LLP and Tredo Engineers, is being funded through state and federal historic tax credits, state brownfields tax credits, and money from the Community Preservation Corp., with a financing guarantee from the State of New York Mortgage Agency. The Bank of Akron is providing interim financing.

The original article can be found here.