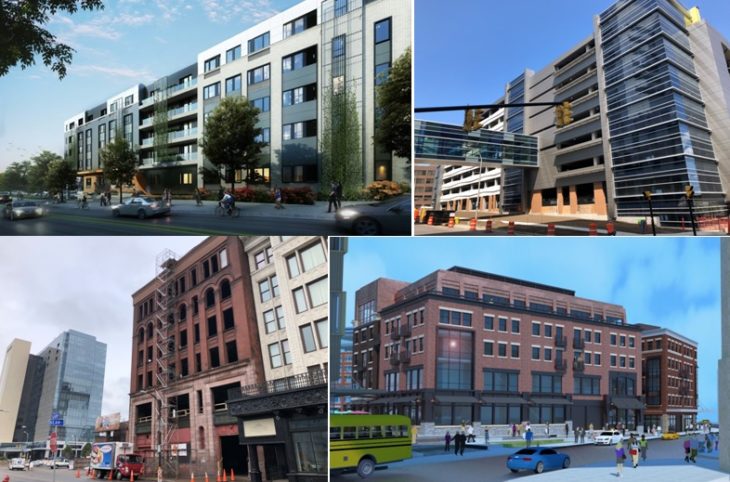 Downtown development this year was not one for the record books. The bar was set high last year when several large projects including the Oshei Children’s Hospital and UB Medical School opened their doors. Ten projects were completed in 2018, fourteen were announced, and eighteen are currently under construction. With the curtain closed on 2018, below is a recap of the development activity that occurred in the downtown area last year.

There were 213 residential units brought online in the downtown area last year while another 519 are under construction and plans for 430 units were announced. That’s a healthy pipeline and all the more impressive as downtown is running out of obvious residential conversion candidates and ground-up new construction is gaining traction. Developers have sought properties to redevelop elsewhere including along upper Niagara Street, the Larkin District, North Buffalo, and they have snapped up empty schools throughout the city.

The downtown area’s largest residential conversion project opened last year. AP Lofts’ 147 units at the edge of the Larkin District bumped off The Lafayette’s 115 units. Near the Medical Campus, First Amherst Development completed 19 North, a 39-unit apartment building. Amy and Mark Judd opened The Alexandre, a seven-story former warehouse at 510 Washington that now contains 12 apartments. A subsidiary of St. Paul’s Cathedral converted its Parish House at 128 Pearl Street into seven apartments and commercial space. Seven new apartments were added to Seneca Street Lofts at 550 Seneca Street by Frontier Group of Companies. Four apartments were created in the former Seneca Plumbing Building at 192 Seneca Street by Ellicott Development and Pegula Sports and Entertainment put four apartments onto the top floor of its mixed-use project at 79 Perry Street.

Three large residential projects are currently underway. On the near East Side, 184 residential units are being constructed at The Forge along Mortimer Street between Sycamore Street and Broadway. Ellicott Development has a senior living facility under construction on North Street, Symphony Circle Active Living, with 119 units. In downtown proper, Douglas Development iscreating 115 units in the base of Seneca One Tower.

Priam Enterprises is converting the seventh through seventeenth floors of The Marin at 237 Main Street into apartments. Ellicott Development’s 500 Pearl has 12 apartments on the ninth floor of the mixed-use building that is under construction in the Theater District. Ellicott is also building ten apartments at its Cooperage project on Chicago Street. The complex will also include a second location for Resurgence Brewing Company, a distillery, a Central Rock Gym, and an outdoor sports complex.

BRD Inc is converting a historic building at 82 Pearl Street into 12 apartments (they recently received their CO and will be marketing the apartments in the very near future), and Chris Jacobs is constructing five apartments on the second floor of 12 E. Tupper Street. Three apartments are included in the mix of uses being created in the former Our Lady of Lourdes Church on Main near Summer by Ellicott Development. At 474 Seneca Street, Buffalo Bungalow is building a three-story structure with two apartments and ground floor commercial space.

As evidenced by the steady trickle of announced projects, developers do not believe the downtown residential market is overbuilt. The largest project unveiled last year was by Cedarland Development and D&S Capital Real Estate for the Buffalo Motor Lodge site located at 1159 Main Street north of the Medical Campus. Their five-story building would include 215 apartments, making it the largest new downtown area residential development in recent memory.

Two new projects are planned along Broadway. HELP USA is working on plans for its third development on Broadway, this one a five-story new building at Broadway and Walnut Street with 60 units. Across the road, Dr. Uzo Ihenko’s Broadway Development & Management Group is proposing to convert a building at 343 Broadway into 40 apartments while maintaining a small amount of commercial space on the first floor.

In a significant boost for development at Canalside, Sinatra & Company Real Estate was designated developer for two parcels east of the Children’s Museum. Early plans for ‘Heritage Point’ include 41 apartments and commercial space. Expect an updated design for that project this year.

In Allentown, Clover Management is working on plans to construct 10 apartments on the second floor of 45 Allen Street and Scott Croce is planning two apartments at 475 Delaware Avenue, the southernmost townhouse of the Midway Block. At Maryland and West streets, Anthony LoRusso is aiming to construct a four-story, 39-unit apartment building.

Ellicott Development is proposing three apartments in a new building at the northwest corner of William and Michigan that would be anchored by a Tim Hortons. On the condo front, Ciminelli Real Estate has finally obtained City approvals to construct 20 townhouses at its West End project in Waterfront Village after a series of compromises with neighbors.

One new hotel opened last year, Benderson Development’s top-to-bottom renovation of the former Holiday Inn at 620 Delaware Avenue into a 105-room Residence Inn by Marriott. In July, Henry Stinson purchased the Adam’s Mark and is currently renovating the property with a new name: “Buffalo Grand Hotel.”

One hotel is currently under construction, the 110-room Aloft by Marriott in Ellicott Development’s 500 Pearl project. The hotel is scheduled to open this month. Just when it appeared to be on track, the proposed 340-room Wyndham at 377 Main Street faces an uncertain future as the mortgage holder for the property initiated foreclosure proceedings against the developer in early December.

Meanwhile, at least three additional downtown hotels are anticipated. The Krog Corporation has been working with Hart Hotels to construct an extended-stay hotel in the Trico Complex. Work on that project is stalled for unknown reasons. Ellicott Development has early plans for a hotel as part of a future phase at its Our Lady of Lourdes project site in the Medical Campus and has talked about working with the Seneca Nation on a mixed-use development along Scott Street that would likely include a hotel component.

One large office building is under construction, Ellicott Development’s, six-story, 167,000 sq.ft. building at 1091 Main Street connected to the former Our Lady of Lourdes Church that is being rehabbed for commercial and residential use. Designed by Smith + Associates Architects, General Physicians and a dental practice affiliated with the University at Buffalo have pre-leased space in the building. Ellicott has long-term plans for a follow-up office building, hotel, and parking ramp on adjacent property. Ellicott also has 55,000 sq.ft. of office space under construction on two floors of 500 Pearl. Recruiting and staffing company Aleron has signed on for 8,000 sq.ft. of space and will be moving downtown from Williamsville. Two floor of commercial space were completed at Ellicott Development’s mixed-use building at 192 Seneca Street.

Pegula Sports and Entertainment renovated 79 Perry Street for its own headquarters, the offices for Labattt USA, along with restaurant and residential space. Gold Wynn completed upgrades to the Athletic Club Building at 69 Delaware Avenue last year and Ciminelli Real Estate is upgrading the lobby and public spaces at 40-50 Fountain Plaza. Exterior restoration work is planned for the Verizon Building at 46 Church Street.

In December, Douglas Development unveiled ambitious plans for an office addition on the western plaza level and along the Pearl Street side of the Seneca One complex. It is part of a multi-phased effort to breathe new life into downtown’s tallest building. Work currently underway involves renovating the complex’s annex buildings into retail space and 115 apartments and construction of two retail buildings on the complex’s eastern plaza.

The Buffalo Police and Fire Departments moved into their new offices in the former Michael J. Dillon federal courthouse on Niagara Square. On the medical campus, the finishing touches were put on the Ellicott-Goodrich parking ramp, a 1,814 vehicle garage connected to the John R. Oishei Children’s Hospital.

At and near Canalside, construction continues on the four-story Ralph C. Wilson Jr. Children’s Museum and Hofbrau House nearby on Scott Street. Work on the latest phase of Cars Sharing Main Street continues along lower Main between Exchange and Scott streets. On W. Huron Street, McGuire Development and Buffalo Development Corporation are busy converting the six-story C.W. Miller Livery Stable into a second Emerson Culinary School.

The Buffalo City Mission broke ground on its new $15 million Community Center at 100 E. Tupper Street in September. The current facility will remain open throughout the construction and the new facility is expected to open in 2020. At 459 Broadway, the former Drescher Paper Box facility was purchased with plans for conversion into a self-storage facility.

News to Look Forward to

The year ahead promises to be interesting. One of the most closely watched lease deals should be inked in the first quarter when M&T Bank decides where to consolidate its IT and technical departments. The bank is looking for 150,000 sq.ft. of space initially with options for another 100,000 sq.ft. The bank wants large, contiguous floor plates, nearby amenities such as retail, restaurants and fitness facilities, ample parking, and outside space for employee gatherings and events . Most observers think the deal is Seneca One’s to lose. If Douglas Development signs M&T Bank, it will be a huge vote of confidence in the developer’s vision for the complex and make their job of attacting additional office tenants along with residents, retailers and restaurants easier.

As soon as this month, we could get a glimpse of Ciminelli Real Estate’s revised plan for 201 Ellicott Street. In the Theater District, Uniland Development purchased the Ellicott Station post office property in November. The developer has not unveiled plans for the property but says the site has the potential for business, residential and/or retail use.

There should be a lot of news coming from the foot of Main Street. Benderson Development is expected to begin the entitlement process for a mixed-use building south of One Canalside this year. The Children’s Museum is opening and the Erie Canal Harbor Development Corporation is expected to break ground on pavilion and interpretive buildings that will include permanent public restrooms, programming space, elevated decks, and concessions. Work on the Heritage Point project at Canalside should start by mid-year if Sinatra & Company’s May 2020 target for completion is going to be met. Proposals for the unused portion of the DL&W Terminal are due in February. Meanwhile, the State awarded a contract for construction of a new downtown intermodal transportation center at the site of the Exchange Street train station in December. Work on that project should be fully underway soon.

Two big downtown-area park projects could make significant strides this year. The Western New York Land Conservancy is working on plans to convert the DL&W rail corridor into an environmentally-friendly trail and linear park. Professional and student designers, architects, landscape architects, urban planners, and artists have been invited to submit their visionary concepts to transform the abandoned 1.5-mile elevated rail corridor by February 15.

We should see if plans for a new or expanded convention center gain traction this year. HVS Consulting recommended that the convention center’s usable space double in size to bring the facility roughly on par with peer cities. A new convention center in the Cobblestone District or an expansion of the existing facility are the two options currently being considered. We will also find out if developers are interested in redeveloping the former Police Headquarters on Church Street.

Thanks to all of the developers and investors both large and small that keep us busy at Buffalo Rising year round. Apologies to anyone overlooked in this recap.