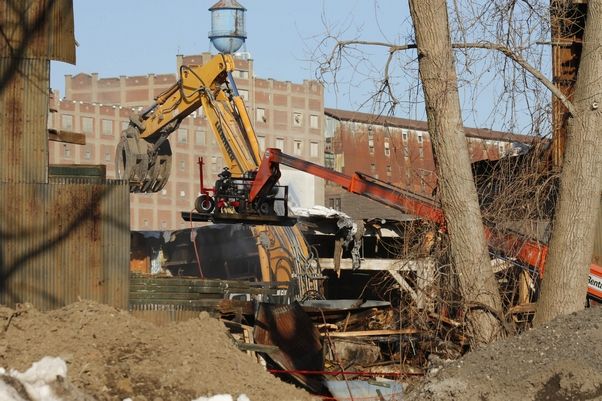 Amid frigid temperatures and the honking of Canada geese along the snow- and ice-clogged Buffalo River, workers mounting heavy construction equipment on Monday continued to demolish the deteriorating former Erie Freight House facility on Ohio Street to make way for a new 78-unit apartment building with water views.

As of Monday afternoon, more than half of the aging but historic building had been torn down piece by piece, as eight contractors for Frontier Industrial Corp. used one large backhoe and one large “pick” with claws and arms to pull apart the already collapsed structure. The site at 441 Ohio is cordoned off with red construction fencing, topped by red caution tape with the words “Danger Asbestos Hazard” prominently displayed. Piles of debris lie in a few places, although most of it will be trucked away to landfills certified to handle it.

Only two sides of the circa-1868 building are still standing, although there are gaping holes even in those. Most of what remains consists of old wood, a corrugated metal sheath on the exterior and some clapboard siding that was original to the building but is now in bad shape, said Samuel Savarino, one of the principal owners of the new project and CEO of Savarino Companies, the general contractor. There are also still some pieces of structural steel and iron supporting part of the building. But parts of the outside wall now hang free, waving in the wind, while beams and floorboards protrude into open air where the rest of the building is now gone.

On top of that, the Old First Ward building had to be taken down slowly and carefully, rather than in a single controlled implosion, because much of the material contains or is coated with asbestos. So workers wear protective gear and masks to prevent them from collecting or inhaling tiny fragments of the cancer-causing contaminant.

“The dismantlement of that building is a little bit tricky, because the whole structure has asbestos in it, so great care has to be taken with demolishing it and disposing of the debris,” Savarino said. “It’s very hard to avoid when it’s in the roofing material and you’re taking it down.”

Within a year, though, Savarino hopes the old industrial site along the river will become the newest trendy address for city residents: Buffalo River Landing. Following the demolition and site cleanup, he and his partners from Frontier Group of Companies want to replace the hulking brown warehouse with a new five-story mixed-use building that will include 78 market-rate apartments and two commercial offices. Plans call for the $16 million project, designed by Chaintreuil/Jensen/Stark Architects, to be finished and open by April 2016. It will join a new project now underway by Ellicott Development Co. up the road for a five-story building with 25 units.

The demolition marks the end of a long process for the Erie Freight House. Years of harsh conditions and neglect had taken their toll on the building, until the roof partially collapsed in 2011, forcing longtime tenant Great Lakes Paper Fibres Corp. to hastily move to new digs, while the city condemned the remaining structure. Savarino bought it in March 2012, but it took more than three years before Savarino could get all necessary approvals, including the demolition permit.

Work began last Wednesday at the south end of the building, next to the Bison City Rod & Gun Club at 511 Ohio. That was followed by demolition of the long stretch facing the Buffalo River, just across the water from the Archer Daniels Midland plant and downriver from Buffalo Riverworks. Most of the remaining work should be done within a couple of days, Savarino said, but “it will probably take us another week to take away the debris, and to take away and store whatever we can salvage from it.” The companies will then spend at least three weeks on remediation of the brownfields site, before starting the year-long construction in May.