How to Remediate a Brownfield Site and Revitalize Our Community 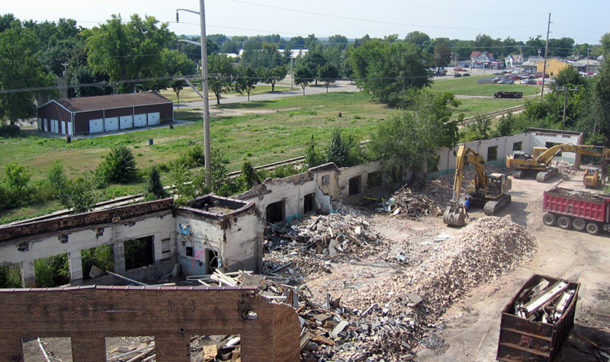 No matter where you live or visit in the United States, you are probably located near a brownfield.  These sites can differentiate from an abandoned industrial location or a decommissioned landfill or the site of an abandoned gas station.  The US Government Accountability Office estimates that there are over 425,000 brownfield and the National Brownfield Association says 5 million acres of abandoned industrial sites exist in the United States.  Brownfield sites are located on many valuable locations such as decommissioned navy yards in New York, Philadelphia and San Francisco.

Developers seek out brownfield locations because they are usually available for a cheap price due to the presence of contaminants.  Not all of these contaminants are hazardous but having the potential to include dangerous contaminants qualifies these areas as a brownfield.  Government incentives such as tax increment financing (TIF) or the Environmental Protection Agency’s (EPA’s) brownfield and land-revitalization grants often help reduce the cost of assessing and cleanup of the site.  In 2002, the Bush Administration incentivized brownfield redevelopment by creating the Small Business Liability Relief and Brownfields Revitalization Act.  The act deals with funding and liability for assessing and cleaning up contaminated properties setting aside $200 million annually in federal funding to go towards brownfield cleanup and redevelopment.  It also provides exemptions from owner or operator liability for those individuals whose properties are contaminated by toxins that were dumped by previous owners or unrelated parties.

To qualify for assessment and cleanup grants, property owners have to satisfy specific requirements.  Prior to starting development, owners must meet environmental due-diligence requirements by taking ownership of the property.  If contaminants are found, owners have to take measures to manage them and apply for government grants before any redevelopment can begin on the property.

The main players in brownfield redevelopment are the property owners, and a real estate or specialized environmental attorney who ensures the project complies with all applicable Lawes and the Brownfield Revitalization Act.  Architects and engineers such as the environmental engineer who designs the remediation, help develop and get the brownfield project off the ground.

Determining whether the site is contaminated is the first step in brownfield remediation.  Owners seeking EPA assessment and cleanup grants must undergo All Appropriate Inquiries (AAI) a process where an environmental professional must complete.  This includes interviewing the current owners and occupants, asking about present and past uses of the property, reviewing historical sources and government records, environmental cleanup liens and visually inspecting the site.  After these actions are complete, the redevelopment team should know if the site contamination is a concern.

Assessing and monitoring the site’s contaminants requires specific technology from the start such as sending soil, soil gas and groundwater samples to the lab to be analyzed to determine what contaminants are present and where they are found.  Possible contaminants include arsenic, chromium, dense non aqueous phase liquids, dioxins, mercury, methyl tertiary butyl ether, persistent organic pollutants, polychlorinated biphenyls and trichloroethylene.

Once the contaminants have been characterized, the environmental professional designs a remediation solution that complies with both state and federal regulations.  The most cost-effective solution for contaminants such as heavy metals often is to bury them undisturbed and cap the site with a building, parking lot or one or two feet of clean soil and plantings.  For non-heavy metal contaminants, such as volatile organic compounds (VOCs) an often solution is to extract and cart away the toxic material to an EPA-approved disposal site.  Bioremediation works only on certain contaminants such as VOCs (volatile organic compounds) and oils, heavy metals generally cannot be bioremediated.  This often happens naturally, without any human intervention.  Bioremediation technologies include: airsparging, where air or oxygen injected into contaminated aquifers removes volatile and semi volatile organic contaminants by evaporating them and bioventing or biosparging, where air is injected into the soil through wells.

Knowing the steps involved in the remediation process will help ensure the brownfield will be cleaned up in the proper way.  Frontier Group of Companies is a leader in brownfield remediation, redevelopment and reuse.