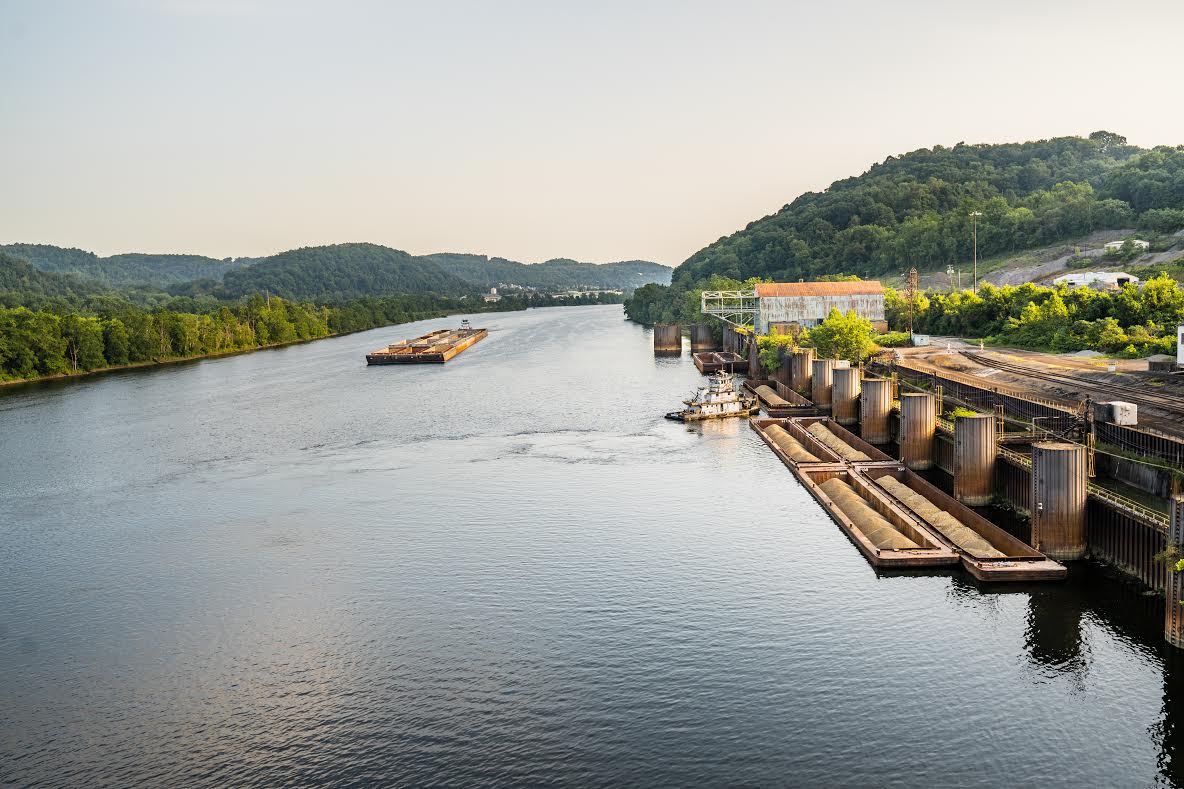 Barges are being fleeted at 60 Ohio River mooring cells for the first time in two decades as part of the repurposing of former steel mill property to create an inland port and industrial park in Weirton, W.Va.

“While we wrap up the remediation, deconstruction and repurposing of one of the largest economic engines in the Ohio River Valley, our team has been designing and preparing industry-ready sites for a 500-acre industrial park and inland river port that can accommodate 3.5 million square feet of new industrial and commercial business for a projected $2 billion of private investment,” said David Franjoine, CEO of the Frontier Group of Companies.

The port is expected to be one of the largest port and rail yards in West Virginia, according to a Frontier news release.

Frontier signed an agreement with Industry Terminal & Salvage (IT&S) the last week of July to have IT&S serve as stevedore and port operator. Port operations are to be multi-faceted and include terminal management activities, other port services and transloading opportunities for truck and rail transportation.

Brad Busatto, IT&S president, said the largest source of inbound traffic to Weirton will be markets up and down the Ohio River.

“When fully operated, our port will have the capacity to fleet over 75 barges and load and unload two barges at a time,” Bussato said. “The first tow of barges will be hauling a variety of products that support consumers, industrial needs and infrastructure.”

Frontier, a large-scale brownfield acquisition, demolition and repurposing company, purchased 1,300 acres of surplus land, including adjacent Brown’s Island, from Arcelor-Mittal USA in 2016. It was formerly part of the Weirton Steel mill. The property is at Ohio River Mile 62.

Over the ensuing years, Frontier has invested $80 million in private equity, razing most of the structures on the site with the exception of the mooring cells, rail yard and 90,000-, 40,000- and 13,000-square-foot buildings, leaving tenant-ready pads, said Pat Ford, Frontier’s director of business development. The site is now known as Weirton Frontier Crossings.

The reopening of the mooring cells is the first step in securing tenants on the site.

“The timing has been right for us because we wanted to make sure we activated those cells at a time we had pad-ready sites where we could begin transloading landside,” Ford said.

Since reopening the cells, Frontier and IT&S have been overwhelmed with interest from companies interested in fleeting operations along that part of the Ohio, Ford said.

“Every city has their main street and, we think, quite frankly, that’s our country’s main street when it comes to economic activity,” Ford said of the Ohio River.

Frontier is now turning its attention to refurbishing its 8 miles of on-site rail and construction of a 3-mile public industrial access road.

“We already have the sites available for transloading, and we already own the rail that we have made accessible and usable,” Ford said. “We just need to make sure that third leg of transloading services, truck freight transportation, can access our pads along the river.”

Frontier has received a $500,000 West Virginia Department Of Economic Development Industrial Access Road grant for the completion of the $8.5 million public access road that will connect the mooring cells and port to West Virginia Route 2. Final design and bids are expected the last quarter of this year, with construction to begin the second quarter of 2022 and completion in the fourth quarter.

Ford said he anticipates tenants locating along that road as it is built out. He noted that Frontier has already signed nondisclosure agreements or letters of intent with interested companies and is currently entertaining $900 million of prospect activity that could create up to 800 jobs. Companies have approached Frontier, the city of Weirton and the relevant state agencies seeking industrial sites of between 40 and 500 acres of operational space, Ford said, noting that sites of that size are challenging for prospects to find in the region.

“We’re confident we’re going to see industrial investment and economic activity on our site throughout 2022,” he said.

Eventually, he said, Frontier’s plans also call for developing the 200-acre Brown’s Island, which is in the middle of the Ohio River.

“The last segment of our infrastructure plans includes a $25 million bridge project,” Ford said of connecting the island to both the Ohio and West Virginia sides, allowing a direct access point to Ohio Route 7.

Frontier has great hopes for the future, backed by a marketing analysis showing that the Weirton site has potential for companies in the chemical, energy, value-added metals, transportation logistics and plastics sectors, Ford said. Subsequent talks with companies have determined that analysis was correct and also indicated potential for businesses related to data processing and cryptocurrency, he said.

The American Chemistry Council predicts that there will be as much as $36 billion in downstream petrochemical and manufacturing investment in the tri-state region of Ohio, West Virginia and Pennsylvania, creating 100,000 jobs. The Weirton Frontier Crossings site alone is expected to create at least 3,000 of those jobs and attract $2 billion in investment, according to a U.S. Economic Development Association-funded study managed by the Business Development Corporation of the Northern Panhandle and partially funded by the city of Weirton.

Caption for photo: Mooring cells at Ohio River Mile 62 are back open, and barges are being fleeted as part of an agreement the Frontier Group of Companies signed with Industry Terminal & Salvage (IT&S) the last week of July. IT&S will serve as port operator and stevedore for the Weirton Frontier Crossings site, the former home of Weirton Steel and Arcelor-Mittal USA in Weirton, W.Va. (photo courtesy of Frontier Group of Companies)