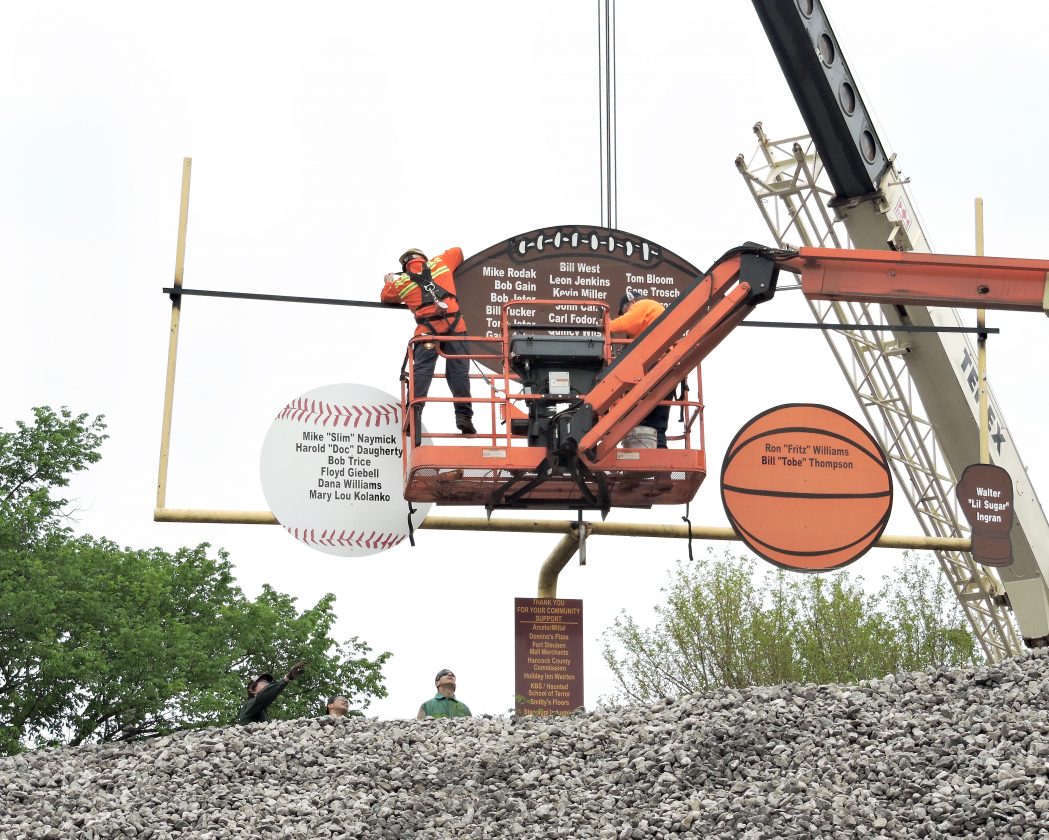 WEIRTON — Following delays over the last few years as a result of the COVID-19 pandemic and other obstacles, the sign paying tribute to the community’s hometown athletes is once again whole.

Under the guidance of instructor Jim Chappell, three welding students from the John D. Rockefeller IV Career Center – Anthony Hernandez, Ryan Speers and Justin Coble – have been working to repair and strengthen the “Hometown Athletes” sign which lists the names of Weirton natives who have made it to the professional levels of various sports.

Wednesday morning, they gathered to reattach various components to the sign’s base near the intersection of Cove Road and Weir Avenue, on land now owned by the Frontier Group of Companies.

The activity attracted attention from many of the passing motorists.

“There were people stopping in the road and taking pictures,” Chappell said.

Originally envisioned by the Weirton Area Chamber of Commerce, the sign was erected and unveiled in the summer of 2014, using one of the goalposts from the former Jimmy Carey Stadium as its base and main support structure.

A heavy storm a few years later damaged portions of the sign, and chamber President Brenda Mull explained the pandemic created some unexpected delays in getting it repaired.

“This has been down for a few years,” Mull said. “It’s taken us a while to get here, but we know it means a lot to the community and we’re happy to have it back up.”

Mull offered her thanks to Chappell and his students at the Rockefeller Career Center, as well as Dan Enich, director of career, technical and adult education for Hancock County Schools, for their work and assistance.

Chappell also expressed his appreciation to Cleveland-Cliffs and their employees Artie Chappell and Cody Davidson for providing and operating a lift and crane to assist with the installation.

“This was a team effort to get it done,” Mull said. “I’m very appreciative and I thank everyone involved.”

The location originally was selected as Weir Avenue had been noted as being the street to be home to the largest number of professional athletes in the country. Research on the initial list of athletes was provided by former Weir High football standout Bob Kelley and Dennis Jones, local historian and the former president of the Weirton Area Museum and Cultural Center.

Space is available to add more names and sports in the future, if needed.