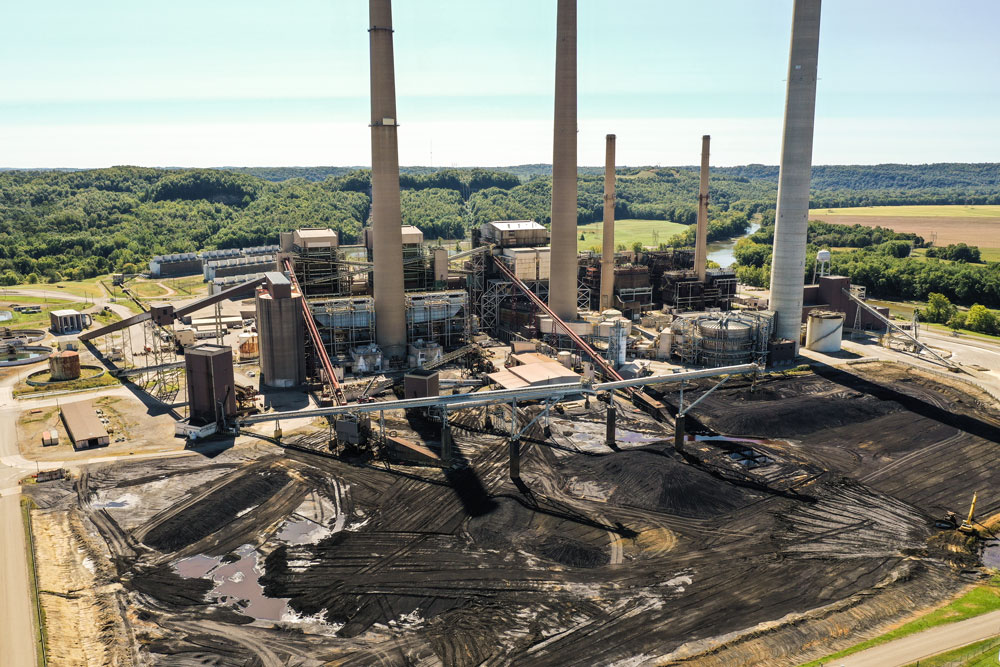 Work is to be completed in 2.5 years, but opportunities for businesses are available now

CONESVILLE − An industrial park on the site of the former American Electric Power plant outside of Conesville is coming to fruition with officials already talking to businesses that could move in. Pat Ford, business development director for the Frontier Group of Companies, talks with Tiffany Swigert, executive director of the Coshocton Port Authority, at the burgeoning Conesville Industrial Park where the American Electric Power plant once stood. Ford estimated they had 9 to 15 months worth of work on the main part of the 2,500-acre site and clearing of coal ash and other materials would be another two years or so. – Leonard Hayhurst / Tribune

The coal-fired plant closed in May 2020 after 62 years of operation. The Frontier Group of Companies, whose core business is Frontier Industrial Corp., took over about 2,500 acres that June, including the main buildings with plans on razing most structures, remediating the coal land and turning the site into the Conesville Industrial Park. They’ve been doing work since that time, including razing three of the large stacks in December. There are also plans to erect a 50-megawatt solar array.

Frontier started in 2001 in Buffalo, New York, with a primary focus on being an industrial contractor and brownfield developer that decommissions, demolishes and re-purposes aging and distressed industrial facilities. Around the time Frontier acquired the Conesville plant they also took on old AEP sites in Cameron and New Haven, West Virginia.

Business Development Director Patrick Ford said he’s received a lot of questions lately on what’s going on with the site and what’s next. He attributes this to work on Ohio 16 by the Ohio Department of Transportation detouring traffic through Conesville and past the old plant.

He said they have about two years of remediation work left, but where the plant stood should be ready to go in 9 to 15 months. The finished product will look like a modern industrial site with a public access road and utilities like water and sewer. The Conesville Industrial Park is rising from the ashes from the former American Electric Power plant outside Conesville. The 2,500-acre site has ample power and other utilities with access to road, rail, and river. Business Development Director Pat Ford said it’s one of the most attractive sites the Frontier Group of Companies has in its portfolio. – Leonard Hayhurst / Tribune

Ford called it a “sexy site” in their portfolio for a variety of reasons related to location and available needs.

“It’s a 2,500-acre site with ample power and ample water. It’s served by rail, road and water. It’s also in a larger economic market that’s very attractive to businesses in energy, chemical, value added metal, transportation logistics and also technology and microchip manufacturing,” Ford said. “The same assets that are used to make a site attractive for generating power are the same assets that are sexy for industries to want to locate to our site.”

Ford said with Frontier being family owned it’s still operated like an old Main Street firm and is concerned about the communities it’s in. Working with local officials, Ford said they’ve developed a great relationship with the Coshocton Port Authority and Executive Director Tiffany Swigert among others. Frontier is also working with leadership in Conesville on some projects, including creating a park with river access.

“We want to make sure we have our hands on the pulse of the community and not only are we bringing industries and businesses that are a good fit for the community, but we also want to capitalize on the labor force in the area,” Ford said. “One of the things that really attracted us to this site was the rich agrarian and industrial heritage that is the foundation for a great workforce. They bring a great work ethic not only to our site, but the businesses we’re going to bring to our site.”

Swigert said the closure of the plant was very emotional and impactful for the community and not the first time Coshocton was slammed by a major company closure. However, this is a crucial moment in Ohio’s history when it comes to economic development and some of the projects coming, like the Intel chip plant in nearby Licking County. Ford said he recently met Gov. Mike DeWine at a function and he was interested in the Conesville Industrial Park because of it’s proximity to the Intel facility.

“It’s really important in economic development to figure out what’s next and not stay in that moment of sadness, but really look toward the future,” Swigert said. “When we realized what the portfolio was with the Frontier Group of properties we got really optimistic.” Work to remediate land and clear coal ash and other materials from the former American Electric Power plant outside Conesville should take another two years or so. However, readying where the plant stood for companies to move in could be within 9 to 15 months. Close to 40 companies have already taken a look at the site according to Pat Ford, Business Development Director for the Frontier Group of Companies. – Leonard Hayhurst / Tribune

The heart of the site with the buildings and ash ponds are being cleaned up to create a large location that could appeal to a major corporation like an Intel. However, there are other areas where businesses can move in now and one local firm has already expanded there.

Crozier Welding relocated in 2020 to a larger facility on Ohio 83 adjacent to the Frontier property. Swigert worked with Crozier on the move and in following up with them found they needed even more room based on an expanding customer base. They were able to move into an adjacent old maintenance building. Ford said they have a few warehouses available to be moved into now.

He’s working with Swigert on marketing the site, meeting with prospective businesses, getting permits ready for new businesses to come in and readying necessary infrastructure. He can’t reveal any potential companies as nothing is finalized. Swigert said they’re receiving several requests for proposals related to interest in the burgeoning industrial park. Park estimated they’ve met with close to 40 prospective businesses so far.

“We’ve got a lot of room to accommodate three or four 50-acre industries or one 500-acre industry and a couple 50-acre industries. What’s really attractive is that we have road frontage for half the site, we have rail along one side and river along the other. We have a lot of flexibility to build a road network to service all the sites and not only accommodate one, but multiple industries looking at the site right now,” Ford said.

More about the Conesville Industrial Park can be found online at conesvilleindustrialpark.com.